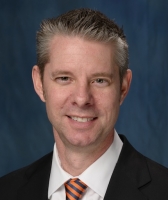 Jody Brown, MD, joined the University of Florida faculty in 2015. He received his undergraduate degree from UF and then attended medical school at the University of South Florida College of Medicine. He completed his residency in psychiatry and fellowship training in child and adolescent psychiatry at the integrated programs of Wright State University and Wright-Patterson Air Force Base in Dayton, Ohio.

After graduating from his fellowship, Dr. Brown served as the chief of the mental health clinic at Barksdale Air Force Base near Shreveport, Louisiana. While there, he served and as a medical director of the Alcohol and Drug Abuse Prevention and Treatment Program and a medical consultant for drug demand reduction. During that timeframe, he also provided support for the psychiatry staff at Keesler Air Force Base in Biloxi, Mississippi.

Dr. Brown returned to Florida in 2008 and worked as a staff psychiatrist at Halifax Behavioral Services in Daytona Beach before moving to Arkansas and joining the University of Arkansas for Medical Services staff, where he worked in a multitude of programs, including a school-based mental health program, known as STRIVE, and a juvenile justice-based program. Dr. Brown then became the director of the child and adolescent psychiatry division for several years.